Here is a list of some of my projects. They are mostly on my Github page as well.

“Ant” is an acronym for “Andrew Norman’s Timelogger.” The full description is on the homepage, but, briefly, it will prompt you and ask you at times that you specify, “What are you working on right now?” and puts the results in a CSV file. By the end of the day, you have a record of how much time you spent on each item. This is useful for people that need to keep track of their projects or someone that needs to keep track of time for billing clients.

I wrote Ant in C# because I needed some C# experience. I initially tried to do it using Gtk# to make it cross-platform, but Gtk# seemed to be too buggy and with too little useful documentation. In the end, I got a Windows 10 virtual machine to do it using the traditional Windows Forms, but the debug version works great in Wine. I actually have been using it in Ubuntu 16.04 without any problems at all.

MondoNotes is a task manager (as in, to-do list) and note-taker, but works differently from most task managers. At its core, MondoNotes is nothing more than a syntax-highlighter, changing colors based on whether you’re marking something as “todo” or “done,” or “information.” This is simple, but allows much more detailed projects and is far more intuitive than any task manager that I’ve used before. The syntax highlighting really helps to scan through the existing notes. 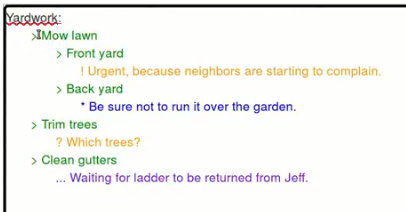 I’ve used this method for several years and slowly developed different features, but, until recently, I had only used a vim syntax file. MondoNotes is more accessible to non-Vim users, and has the advantage of being “in the cloud”, so I don’t have to worry about syncing files or downloading anything.

A video introducing Mondonotes can also be found here.

OpenVPN on DigitalOcean: As Easy As Making A Peanut Butter Sandwich

This project is a combination of two things: Two BASH scripts and a YouTube video series. In the wake of recent congressional action, I thought I would really like to make creating an OpenVPN server on DigitalOcean as easy as humanly possible, so I wrote these two BASH scripts to automate just about everything described in DigitalOcean’s instructions for setting up a VPN.

The video series is probably the most visible result of the project, and that did take a lot of video editing work, but the vast majority of the work was creating the BASH script. (I had to do a lot of Googling to figure out a lot of BASH commands to do it, but it was worth it.)