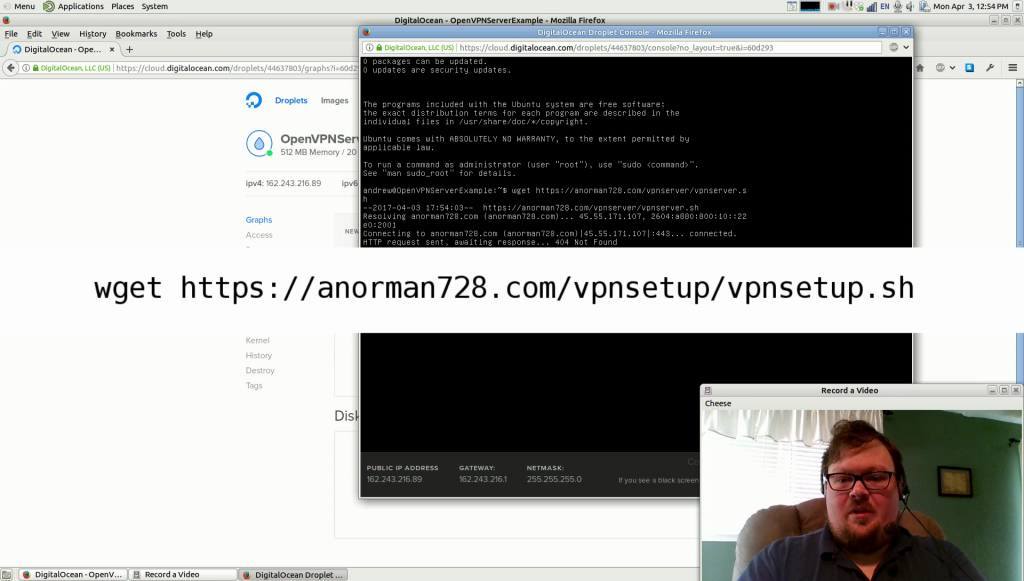 I spent my weekend learning about OpenVPN and how to set up a DigitalOcean droplet to act as a VPN server. This was inspired by recent congressional actions and the anger and frustration that followed from citizens. The short version is that you can use OpenVPN to hide your browsing history from your ISP, so they won’t have anything to sell. Additionally, though, you can use a VPN to protect your data while you’re using a public network to prevent man-in-the-middle attacks, like a coffee shop or a hotel network. Traveling professionals have been doing this since at least the 90s, and my goal, at the moment, is to make this accessible to pretty much any human being that uses a computer.

This is why I wrote two BASH scripts to automate the instructions given by DigitalOcean. These scripts should let you have a fully-functioning, private VPN server up and running in about twenty minutes. This is not you handing information over to a third-party VPN service that you don’t know if you can trust– This is your own VPN server, that you control, running on the highly-trusted DigitalOcean cloud.

I also created a YouTube video series to give an example of it being set up. As I say in the videos, I want a private VPN server to be as easy to make as a peanut butter sandwich.

If you’re interested in setting up a VPN, I hope this is helpful.